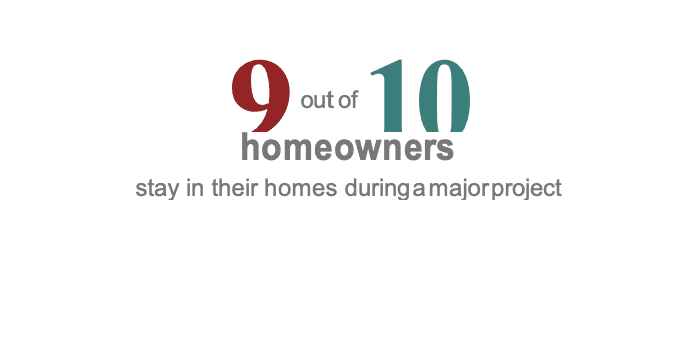 Awareness of indoor air quality (IAQ) among homeowners has heightened in recent years, especially when someone in the home has asthma, allergies, heart disease or other serious long-term conditions. To combat indoor pollution problems, homeowners use a number of creative remedies that mask the problem more than they fix the issue.
During a home remodeling project, IAQ can be much worse than normal because of the excessive amount of dust that gets stirred up every single day. For example, let’s say that the particle amount in a house on a normal day is similar to a light drizzle. The daily dust bomb from a remodeling project? It’s a torrential rainstorm.

One study shows that homes being remodeled have five to eight times the amount of particles in the air than homes that are not being remodeled. Remodeling dust – some of it so small you can’t see – can damage your short-term and long-term health.
During a remodeling project, most homeowners believe that the responsibility for IAQ is in the contractors’ hands. Nine out of 10 homeowners stay in their homes during a major project and rely on the contractor to protect or manage the air quality. This can be a recipe for disaster because some contractors do not manage it correctly, and because homeowners often don’t ask questions until it’s too late and dust fills the home on a daily basis.
The good news is that top contractors across the nation are using new tools and work processes to minimize the dust.

The new practice is to collect dust at the point of generation while it is still airborne, such as with the new BuildClean Dust Control System. Collecting particulate in this manner is the most effective way to capture and virtually eliminate all types of worksite dust.
For decades, contractors have tried to “manage” dust with some very basic – but mostly ineffectual – methods. When a contractor uses BuildClean along with other best practices, there is a dramatic reduction in airborne particulates. The IAQ can improve to better-than-normal levels.
In fact, homeowners can feel the difference in IAQ before the project has even begun, and some have asked “Are you pumping fresh air into my house?”
The result? Homeowners can breathe easy. Livability of a home is preserved throughout the entire project.

Remodeling dust’s hazardous effects.
If IAQ problems exist before a remodeling project, they could be magnified by 10 times during a remodeling project if a dust management plan is not in place.
You might be familiar with the dust cloud that results from sanding a small area on a wall. Imagine that tiny project magnified to a much larger area for weeks at a time during a kitchen, bathroom or basement reconstruction.

If unmanaged, dust will get everywhere: on floors, furniture, glassware, dishes, even toothbrushes. The homeowner’s family and pets will be in the line of fire as well.

During a typical project, multiple dust-generating events will occur, such as demolition and drywall sanding. The dust will travel with the airflow of the house. Some common harmful substances that may be uncovered during the remodeling of an older home include:

> Dirt and debris of many sizes, including those you can’t even see
> Organic matter like rodent feces and dead bugs
> Materials such as drywall, cement and sawdust
> Dangerous substances such as silica, asbestos and lead
> Mold and mildew
> Volatile Organic Compounds (VOCs)
Air quality is usually measured as a reading of particles larger than 0.5 micrometers (μm) in one cubic foot of air.

Recent air testing further demonstrates the drastic effect remodeling can have on IAQ.

Bert Schiller, an independent certified industrial hygienist, conducted a test of the BuildClean system on a remodeling project. Just after the dust-generating event, he reported the following:

“The particle counts in the living room quickly reached in excess of 500,000 particles (per cubic foot of air) of dust greater than 0.5 microns. The BuildClean unit was then turned on in the center of the living room in order to determine how quickly the unit could lower the dust count.

“After six minutes, the BuildClean unit had lowered the dust concentration in the same area to roughly 140,000 particles greater than 0.5 microns. After 12

minutes (one air exchange of the room), the BuildClean unit had lowered the dust concentration in the same area to roughly 90,000 particles greater than 0.5 microns.”

Ingesting dust you can – and can’t – see.

Smaller dust particles – including those you can’t see – are the most hazardous. They are lighter, stay in the air longer and travel farther than larger particles.

When those particles are from potentially dangerous substances (see list above), it is cause for alarm.

According to the U.S. Environmental Protection Agency (EPA): “The size of particles is directly linked to their potential for causing health problems. Small particles less than 10 micrometers in diameter pose the greatest problems, because they can get deep into your lungs, and some may even get into your bloodstream. Exposure to such particles can affect both your lungs and your heart.”

The International Standardization Organization (ISO) reports that “dust particles are usually in the size range from about 1 to 100 microns (μm) in diameter, and they settle slowly under the influence of gravity.”

It’s important to note that the health risk is greater when the inhaled particles are smaller. Because as the particle size decreases, settling time increases.

Particles smaller than 1μm may not settle at all but stay airborne permanently. Therefore, it is essential to take steps to clean the air when remodeling.

Lead dust is another danger because it – not paint chips – is the top cause of lead poisoning. If a home was built before 1978, homeowners can create lead dust by disturbing subsurface layers of lead paint during home improvement projects. Dry sanding, scraping, brushing or blasting lead-based paint can produce dust and paint chips.

5 Professional Tips Before You Remodel Your Bathroom
August 12, 2020

Loads of Function in a Classic Black-and-White Laundry/Bath
January 24, 2020

Change Your Bathroom, Inc.
4.8
Based on 18 reviews

Nathan Abbott
16:19 12 Nov 20
The guys at the Change Your Bathroom team were awesome. I was able to get an incredible quote and renovated my parents... bathroom just in time to get it listed. I highly recommend them for your remodeling needs.read more

Janet Gray
23:55 30 Dec 19
Jesse performed plumbing work in our home during the holidays. He corrected a horrible plumbing job that another... company supposedly repaired. Jesse installed a 40 gallon hot water heater, expansion tank and a regulator valve. The time it took to assess the problem, undo the incorrect work, then complete the work properly required extra time and a lot of patience. This is not the first time Jesse has done work for us but it is the first time we have written a review. He demonstrated a wealth of knowledge and a ton of professionalism. Thank you from the Bells.read more

Frank Clark
00:07 30 Dec 19
Working with Michelle has been an extremely rewarding and satisfying experience. Her unique combination of solid... experience, encyclopedic knowledge, and an absolutely unerring eye for design yielded superb results in a major master bath remodel. Michelle's patience with questions, ability to provide practical yet fashionable options, and superb professionalism made taking on an extensive renovation a delight.read more

Michael Dean Myers
23:25 28 Dec 19
Outstanding support and service. From Michelle listening to our wants, needs and requests, her first response was... always "Let's see how we can make that happen." She shopped with us to provide us with a wide-range of options and gave us the guidance we needed to put together a great bathroon. Her computer rendering was beautiful and had us hooked immediately on her design. However, the actual finished project far surpassed our expectations. Jesse and Austin paid incredible attention to details and are definitely "The A-Team" when it comes to renovations. Now my wife and I show pictures of our bathroom the way new parents show off their newborns!read more

Sarah Rennie
15:59 27 Dec 19
I needed a new glass custom shower door for steam shower. The price was hard to beat, and from measurements to... installation took no time at all. I'm happy with the quality from the stainless steel handle to hinges everything is solid and stylish. Cant wait to pick out and install my new tub next!read more
Next Reviews
2kFans
5.4kFollowers
647Followers
4.2kFollowers
43Subscribers
809Comments
Related Posts
Go to Top
Send this to a friend